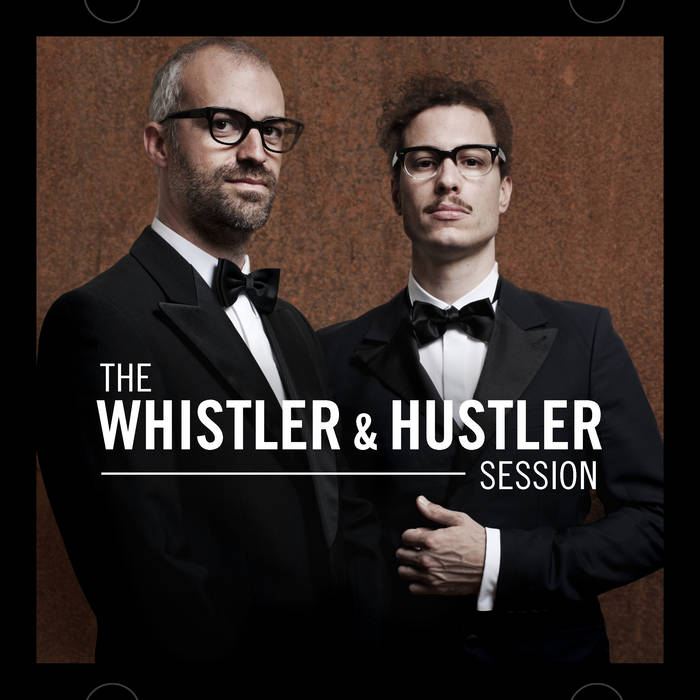 Deidre House Wow, this is just an insanely good name your price. The words don't yet exist to adequately describe it, though you can see some admirable attempts below. Favorite track: There's A Piano In The House.

Olga Kivius If someone asked me who is playing on this album i would answer that probably it could be an unknown for me album of Hauschka. But this is not Hauschka. This is a duo of two Swiss pianists, at least one of them is well-known by his jazz trio Rusconi ) and the second one explores the potentiality of prepared piano in his recordings )
Stylish, dynamic, musical, polyrhythmic, playful, ironical, mysterious, dangerous, creative - this album is really good )) Favorite track: Hiding In Public.

MeoGraf Fresh and innovative!
A great finding from Olga Kivius

Whistler&Hustler – the men without fear

Whistler&Hustler, two gentlemen stepped out of a Magritte painting. Groomed like gentlemen, polite like gentlemen, and ever so slightly sinister, also like gentlemen. Ferrante & Teicher might be the dangerous godfathers of these two. Or maybe Sparks, though Whistler & Hustler do smile, occasionally. And there's always the Thompson Twins, but we'll keep that to ourselves. Do we feel safe in the company of these two? Maybe we do, maybe we don't. Either way, never this side of a Laurel & Hardy movie has a piano been misused, caressed, tortured and loved more than by this duo of elegant miscreants.

Whistler & Hustler like to talk about a grandmother – their grandmother. In our search for documentary evidence of the existence of this grandmother we might be well advised to delve into the realm of the spiritual rather than birth registers and phone books. Nevertheless, we like to believe that Whistler & Hustler – being the gentlemen they are – were called upon to help the old lady with her spring clear-out. Unfortunately, Whistler & Hustler also suffer from attacks of sudden playfulness. Discovering a surreally out of tune piano under a quilt of spider webs in the guest room, they dived into the instrument with the abandon of boys in a spring lake.

In another life, Whistler & Hustler are Stefan Rusconi and Ephrem Lüchinger, old friends from Zurich, pianists both. Stefan is the founder of the double bass/drums/piano trio (plus effects) Rusconi. Ephrem is a member of singer/songwriter Heidi Happy's band and composes electronica-based film music. Backstage at a film festival, Stefan and Ephrem found themselves sharing the keyboard of a grand piano, playing a wild version of an Aphex Track-piece. It was the beginning of a beautiful idea.

Two years ago, the idea began to take audible shape. Allowed the use of a school building, Whistler & Hustler spent a summer diving – literally – in and out of their pianos, recording countless fragmentary ideas and grooves, sticking religiously to their self-imposed rule: every single last sound had to have its origin somewhere in the piano. Any trick was allowed. Nothing was too much trouble, as long as the sound was right. Thus, for their super funky version of the Bullitt theme tune, they replaced a piano string with 15 metres of dental floss. The flute effect was achieved by plucking the piano strings with plastic spoons. Once they had collected a laptop full of fragments, they set about bashing them into rhythmic and melodic shape on the computer.

We may doubt the veracity of the tales Whistler & Hustler are fond of dishing up about their past. What cannot be doubted is the sheer joy and vitality that springs from their music. Far from a cerebrally abstract studio project, their first album, The Whistler&Hustler Session, is brimming with rhythmic brio and melodic wit. Referencing all kinds of great and greatly-not-so-great moments of popular (cinematic) culture, their music is a bold brew of everything from Cage to Drum and Bass, Satie to Elton John, taking in the mad punk-improv-funk of Rip Rig & Panic as well as Kurt Schwitters's collage philosophy and, yes, the album covers of Ferrante & Teicher.

A warm thank you to Laura de Weck, Hanspeter Künzler, Monika Rusconi, Schulhaus Waidberg, Hannes Kumke, our wifes, Whistler's grandfather Dirk and Hustler's dog Valentine, that passed away recently and was of such a help during the recording session at Münchsteinhausen.

Bandcamp Daily  your guide to the world of Bandcamp